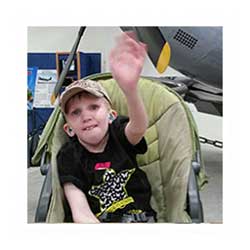 Derick was diagnosed when he was 5 ˝ years old. When he was born he had already had a hard time just surviving Gestational Diabetes and fighting with his cord. He weighed 5lbs. 15oz. & was 19” long. For the first four months Derick had a hard time eating and keeping his food down but slowly we found what worked best for him. At 14 months our Doctor mentioned that they had decided to give him the diagnosis of failure to thrive and submit his name to the state for tracking and funding. We didn’t know that he was that far behind, yes he was slow but a “Diagnosis” that was far from the truth. He has also had eye surgery, oral surgery and hip surgery. After several test, some with sedation, and different doctors we were pointed to CS.

Daily Derick wears hearing aids in both ears, 2 stage AFOs and a walker. He rides the bus and attends school. At school and at daycare he plays with his peers. During the week Derick loves his visits with his physical, occupational, speech and music therapist. When he is home he fights with his little brother who is taller and heavier than him. It is hard to keep him home because he is a people watcher and wants to love on anyone and everyone he meets. Even though we live in Arizona, Derick loves to play outside. In the summer months, Derick loves to swim as long as the water is above 88 degrees.

Since our diagnoses, Share & Care network has given us more information and support than our local doctors could. This website was our best source of information when we were first diagnosed and I am happy Derick’s information can be shared. Also the informational flyer has been a big help. I give a copy with highlights that apply to every doctor, teacher and therapist Derick meets.