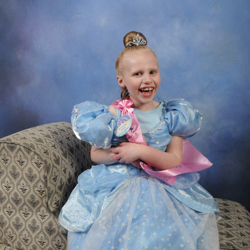 Abby was born on April 30, 2007.  She appeared normal at birth with the exception that she was 6 lbs. at 40 weeks.  She nursed fairly well for the first 2 months of life.  At 3 months her daycare noticed that she wasn’t focusing on the mirror above her changing table.  She was then diagnosed with bilateral cataracts by an eye specialist. Cataracts were removed and she wore removable contacts.  At age 4 she had permanent lens implants surgically placed.  She continues to have good close vision.  She has not had issues with hearing to date.

Abby developed painful reflux at 3 months and it got worse and worse.  She eventually stopped nursing by 3.5 months and wanted nothing to do with eating.  Her weight dropped and her growth did not progress.  She could not hold her head up properly and developed Torticollis.  With physical therapy, the Torticollis subsided.  However, she was not gaining milestones.  At 10.5 months she was hospitalized for failure to thrive and dehydration.  A feeding tube was placed and she was released home after a month in the hospital. Abby gained weight and her head circumference increased very slowly.  She was walking by 2.5 years of age and continues to walk with braces and special shoes.  She has fine motor tremors but can feed herself by mouth and color outside of the lines.
Abby was not diagnosed with Cockayne Syndrome until age 1.5.  She was subjected to multiple blood draws, an X-ray, and an MRI with no known diagnosis.  She was seen by a neurologist, ear, nose, and throat specialist, gastroenteroligist, and geneticist.  None of these specialists could figure out what she had.  Finally, a second geneticist considered her small head size and cataracts and sent her blood to Dr. Neilen in Boston for testing.  It was confirmed that she had mutations on the ERCC 6 gene.  Her mutations were unique compared to other CS mutations found, according to the doctor.  Blood from Abby’s mom and dad were sent to Boston and each of their mutations were found.  One of Abby’s grandmothers also sent her blood and it was determined that she is also a carrier of CS.
Abby lives with her parents, brother, Grayson, and sister, Maddie.  Abby continues to receive occupational, physical, and speech therapies.  She has also participated in equestrian therapy to help with physical development.  She continues to use her feeding tube every night at a slow rate to supplement daily nutrition.  If she is sick she may require bolus feeds through her tube during the day until her sickness subsides.
Abby loves balloons, music, dancing, coloring, hugs and watching videos.  She attends public school daily in a smaller classroom setting.  She rides the bus to and from school.

One thought on “Abby”