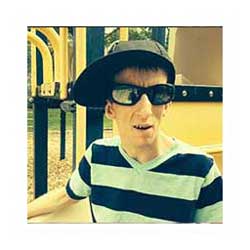 A little about me:
John weighed 8 lbs 10 3/4 ozs when he was born.  He was 21″ long.  We didn’t really notice any problems until he was about 8 or 9 months old.  His growth was dropping off  and he was not developing.  We took him to Omaha to the Children s Hospital.  They did lots of tests and could not come up with any diagnosis.  We were told by the neurologist that this is how God made John.  We were to love him and do our best to keep him healthy.  Over the years, we saw doctors and did our best to keep him healthy.  We met with a geneticist when John was 6.  He said what John had was not hereditary.  When John was 11, we met with him again at a clinic and he had a book with a picture of someone with Cockayne Syndrome.  We were blown away!  He looked so much like John.  At that time they told us average life expectancy was 12.  What a blow! We were reeling for so long.    But then we found Share and Care.

John is a wonderful son.  He is happy and mischievous.  He loves people, basketball, school, driving anything he can, Barney, working in the yard with his Dad, and his sisters.   John has stayed very healthy. He had a fundoplication when he was 3 for reflux.  He has lost the vision in his right eye and doesn’t have a lot of vision in the left but he just adapts and keeps going.

He loves life and is an inspiration to us as his family and to strangers we meet that become John’s friends. John never goes anywhere that someone doesn’t know him.  He recently went to prom with his friend since age 3.  He graduated with his class in May.  He loved wearing the tux and we thought he was going to sleep in it! John is 27 yrs old. Birthday 5/31/87. Loves driving his tractor, basketball and people!