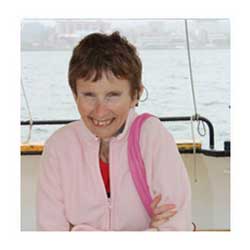 Kelli is 47 yrs old with type 3 CS. Kelli got diagnose as a pre-teen. Kelli grew up very sheltered from the world, until her mother died. As Kelli grew up, she began to show everyone just how smart she was. Kelli ended up going to University and getting a business degree in accounting. Kelli worked for the Sears call center for many years as the Manager.

When Kelli was child she came down with something, which ended up taking her hearing. Kelli had to learn thing all over again. Kelli ended up getting a Cochlear implant, which allowed her to get some of her old life back.
As Kelli CS got worse she became involved in the Epilepsy Association of NS and became a coordinator for The epilepsy Fun club. She did fundraiser and event planning for all the members. It was during this time Kelli meet Janice and they became very close friends. One day Kelli took several seizures back to back and landed in the hospital. It was at this time the doctors told Kelli she would never live on her own again. Since Kelli’s family were not close by most of the time for many reasons, Janice was asked to take over Kelli’s medical issues as she needed someone on paper to be contacted or she could get into a long term care facility.
Janice got Kelli into a small option home she used to work for. Kelli did good there for a few years, until she began having trouble swallowing. Kelli was sent to the swallowing clinic where they told her she would need a feeding tube put in. Due to needing the feeding tube Kelli wasn’t able to stay in the small option home and was then transferred into a nursing home.